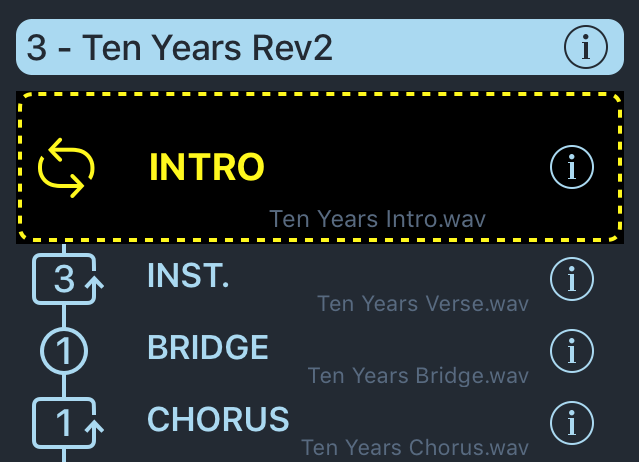 Music is an abstract type of thing; as it is something that we hear instead of see it is often quite difficult to visualise a piece of music.

More importantly however is the ability to transfer one musician’s song structure to another musician.

One would thing that in today’s digital world one wouldn’t need notes of paper to show the partition, notation,score, etc; however we still need to show the song structure.

It seems ridiculous that we have the ability to record and listen to a song; however to illustrate the song structure, one is often let down by the technology.

I’ve worked with many musicians in many countries; and the most popular/common  method for showing/memorising the song structure, is writing down the lyrics on paper, and putting the chord names on the lyrics like Em, G, C etc.

But is this the best way?

I could not say this was the fastest or most efficient method for sharing song structure. I have seen bands waste a lot of time and money doing this, and trying out digital alternatives.

Yet memorising this basic song structure is integral to a musicians ability to play live on stage, at home or in the studio.

As it is;  a band spends excessive time repeating songs in rehearsal to be performance ready. This is partially because there are many things that can’t be shown on current  paper or digital methods of noting. Things like intro / instrumental, fills, one bar of bridges, one bar of drum fill between verse and chorus but two bars of drum fill after second verse and so on.

Musicians do their best, by memorising through endless practice, and visualising the best they can at the time with the noting methods available to them and their band members.

So what we can do ? How do we improve this?

I’ve been in the music world for over 20 years; this is what us musicians do. Write the chords on lyrics put the arrows for repeating parts;  like chorus and verse, and explain and  repeat with band members.

We can improve this communication by sending lyrics and chords via email. But is that all? Well, there are some lyric and chord visualisations applications out there, but to be honest they are not much of a evolution and are far from performance friendly. I often think it’s just funny way of using “high technology” for something that is just as restrictive as the paper noting equivalent .

Commercial thoughts dominate technology, and as a musician I was getting bored of seeing the same technology on repeat, different brand name but same restrictive product. Little value for the musician, products just being released to stimulate the market! It’s easy to understand, we want a product that sells us promises; “Easy just one click”, It is tempting I agree; but the technology should match the offer; it should be easy but not limited! 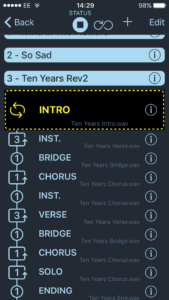 Thankful, fate intervened, and I was able to put some time aside to create Stage Improviser App.

For Stage Improviser we wanted to be beyond all those dusty thoughts and create a new way of communication between musicians; we used a similar lyric/ chord noting method that we are all familiar with, but we also added visual common sense icons and symbols for visualising the song structure.

It is  shareable between Stage Improviser users, with any common messaging methods, and immediately playable. For the person who receives the message the song structure is easily understandable, with exact play/repeat times and improvise-able parts clearly shown.

Personally I encourage you to give a try and throw away your old music notebook, you wont need it anymore, I certainly wont be picking it up any time soon. I have Stage Improviser!